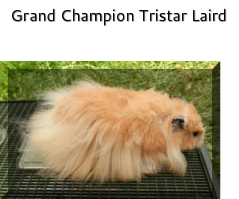 WHO ARE WE AND HOW DID WE GET STARTED? 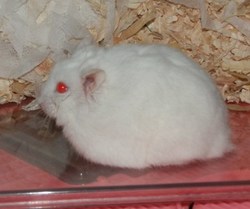 Jean lives in Bath with a mixture of Syrian and dwarf (Campbell's, winter whites and Chinese) hamsters

She started off with pet hamsters as well as other small furries as a child, but got into showing when she bought Sam (Samantha), her first Syrian hamster, from breeders, Towy Vale, at the Abergavenny Agricultural show in 1989. It was after mating Sam to her friend Carol Leat’s male hamster Harvey, and producing some fine babies that they both decided to enter their first show. It was October 1990 and the show was the London Championship Show and  they entered 5 Syrian hamsters; Tommy a short hair golden, Sydney a LH BEC Banded plus three others.  David judged long hairs at that show and awarded Sydney first in his class.  They won a total of three first prizes that day and were bitten by the showing bug, and from then, they went from strength to strength.

Much of their good foundation stock was obtained from Jenny Rees of the Hedgehog Hamstery along with other well known breeders.  Their first Best In Show was won by Kitty a long hair black eyed cream in October 1991 and they did the double at this show winning Best in Show dwarf with Mustard a normal Campbell – the car floated home that day!  Jean and Carol showed in partnership for a further 10 years winning many Syrian and dwarf Best In Shows and other high accolades until Carol stopped keeping hamsters for personal reasons.

During the following four years Jean continued to show Syrian and dwarf hamsters, for some of the time in partnership with Anthony Oakden, winning Exhibitor of the Year during that time.  Jean’s favorite colour Syrians are creams and sable roans along with good dark swarthy golden's.  Her most memorable hamsters being Lola a long haired satin BEC Banded with a perfect band, Hester a short haired honey and Josephine a long hair BEC among many. 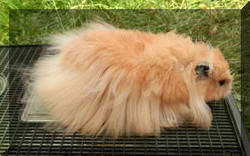 David was working in a pet shop in 1985 when a customer came in with some adult Syrian hamsters to re-home.  He fell in love with a short hair satin black eyed cream banded male who he called Ossie and that was how it started.  He decided that Ossie should be a father and brought home what he thought was a cinnamon female.  She turned out to be a male on closer inspection and was christened Ollie. Eventually hamster number three, Desiree, was in fact a female and became the mother of the first litter that David bred.  He met Susan and Neil Washbrook of Lilliput Hams in late 1986 and bought his first show hamster from them in the spring of 1987, a short hair lilac female that he named Minerva.
David attended his first show at South sea that year and was placed VHC in the Novice class.  With selective breeding, buying good foundation stock from other top breeders, the ability to recognise good type and with help and assistance from Susan and Neil and Elaine Quincy of Moonacindy Hamstery, David’s showing successes went from strength to strength over the next two years.  This culminated in a first Best In Show at Hastings in November 1989.

David’s hamsters have continued to do exceedingly well at shows, his most successful year winning Best In Show twelve times.  David has a real soft spot for a lilac as it is a beautiful colour and a really  good one is wonderful.  His most memorable hamsters are Pippin a short hair dark grey dominant spot, Vitolea a short hair cinnamon and Orinoco a long hair smoke pearl, again as with Jean there are many others that spring to mind. 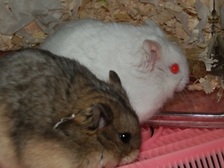 In the summer of 2004 Jean and David decided to pool their knowledge and also their hamsters with the help of silent partner Graham Calvert.  Between them they have a combined experience of over 40 years breeding, showing and judging.  At their first show in September of that year, and while still considering an appropriate prefix name, they won Best In Show long and short hair at the London Championship show under international judges Anna Thorsjo and Anna Lena Johnsson.  Tristar have continued to maintain a high quality of show standard in both dwarf and syrian hamsters ever since.  Some of their most successful hamsters who have won multiple BEST IN SHOW are Woodie (a ‘wonderful’ golden short hair), Dianthus, Cassie, Cedrus, Cantarna, Jenise, Zimbali, Aurinia, Harvey, Smouldering Flame, Zion, Tempest, Timber, Ormus, Jago plus many others.

Jean has been a fully qualified Syrian and dwarf judge since the mid 90's and is a National Hamster Council (NHC) judge (Senior Judge) for both Syrian and dwarf hamsters. David qualified as a Syrian judge in 1991 and as a dwarf judge a few years later.  David is also an NHC (Senior Judge) for Syrian hamsters.
Both have judged on the continent (Finland, Sweden, and Holland) and in Northern Ireland.